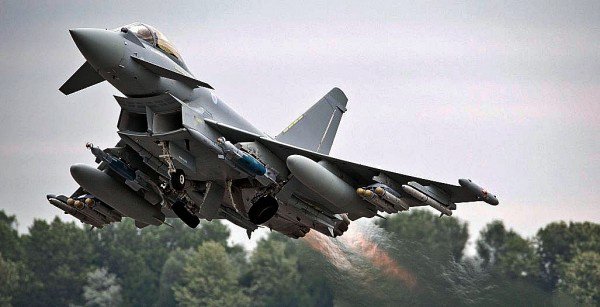 Combat aircraft are a vital part of any air force and examples such as the F-35 Lightning or the Eurofighter Typhoon, demonstrate the result of the important advances made in engineering to achieve air superiority, a key component in today’s war scenarios. Fieras de la Ingeniería analyzes the ten most advanced combat aircraft in the world, based on their specifications, technologies, performance and weapons capabilities.

The F-35 Lightning II is the only fifth-generation multipurpose fighter belonging to an international development program. Its extreme agility and stealth capabilities, along with the integrated package of sensors and modern weapons, give the F-35 a clear tactical advantage over the rest of the combat aircraft in the world. The single-seat type aircraft is equipped with a wide range of weapons systems, such as the Sidewinder, Storm Shadow, and Joint Direct Attack Munitions (JDAMs).

The F-35, which successfully completed its maiden flight in December 2006, was developed primarily by Lockheed Martin engineers, in conjunction with Northrop Grumman, BAE Systems, and Pratt & Whitney companies. The three existing variants of the F-35, including the CTOL (Conventional Takeoff and Landing), the STOVL (Short Takeoff and Vertical Landing) and the CV (Aircraft Carrier Version), will replace the A-10, F-16, F / A-18 and AV-8B Harrier of the United States Army, as well as other types of previous generation fighters from the allied nations.

The F-22 Raptor, jointly developed by Lockheed Martin and Boeing engineers, is a highly advanced fifth-generation twin-engine tactical combat single-seater. Its performance, stealth capabilities and integrated avionics make the F-22 a highly maneuverable and versatile fighter. The Raptor, made its first successful flight in September 1997, was adopted by the US Air Force (USAF) as a multi-mission air superiority fighter. The first production series of the F-22 was delivered to Nellis Air Force Base in January 2003, formally entering Air Force service in December 2005.

The F-22 Raptor can use sophisticated air-to-air and surface-to-air missiles. The new technologies integrated on board the aircraft make it an optimal platform for a wide variety of missions, including surveillance, reconnaissance, attack, electronic warfare and signals intelligence.

The Eurofighter Typhoon is a new generation multi-role fighter whose performance places it at the top of our ranking. With a delta-cantilever wing design, the aircraft integrates the latest avionics and sensor technology, including the Defensive Aids Sub System (DASS) and a wide range of weaponry such as the Mauser BK-27 27mm cannon, air-to-air missiles. air, air-to-ground, anti-ship and precision guided projectiles.

The Sukhoi Su-35 is a highly advanced version of the Su-27 fighter, incorporating fifth generation technologies that place it in the range of 4 ++ aircraft and, whose capabilities, allow it to be superior to the rest of most of the competitors generation 4 that are being developed around the world.

The first Su-35 prototype was built by Russian engineers from KnAAPO (Komsomolsk Amur Aircraft Production Association) in 2007, successfully making its maiden flight in February 2008. The Su-35 is capable of missile deployment. long- and short-range air-to-air, air-to-ground and various types of precision guided weapons. The aircraft’s 14 anchor points allow it to carry a maximum armament payload of up to 8 tons.

The F / A-18E / F Super Hornet is a new generation combat-proven multipurpose fighter-bomber, with a larger and improved redesign over its previous version, the F / A-18C / D Hornet. The aircraft is currently in active duty for the US Navy and Royal Australian Air Force (RAAF), replacing the Grumman F-14 Tomcat when it entered military operation in 1999.

The Super Hornet’s suite of integrated systems and networks offers greater interoperability and critical strategic support for troops on the ground, being able to handle a wide variety of air-to-air and air-to-ground intelligent weaponry, as well as laser-guided bombs. The fighter’s combat capabilities were put to the test during Operation Iraqi Freedom, Operation Enduring Freedom, Operation Southern Watch, and the war in Afghanistan.

Developed by the engineers of the French company Dassault Aviation, the Rafale is a twin-engine multi-role fighter capable of air sovereignty, rapid deployment, reconnaissance and nuclear deterrence missions in the air. The aircraft, currently in service by the French Air Force and Navy, features outstanding avionics and advanced smart sensor systems.

Rafale can incorporate a 30mm cannon, air-to-air, air-to-ground missiles, a wide range of laser-guided bombs, as well as nuclear interception and anti-ship missiles among others. Its first combat deployment took place in 2002 during Operation Enduring Freedom, later being used in another series of combat missions in Afghanistan, Libya and Mali (Operation Serval).

The fighter is available in three variants: RAFALE C for the single-seater version, RAFALE M for the version adapted to aircraft carriers and RAFALE B for the two-seater version.

The F-15E Strike Eagle is a new generation of multi-role air superiority fighter-bomber developed from the F-15 A / D, now considered the backbone of the US Air Force (USAF). The latest technology in its avionics systems provides the Strike Eagle with the ability to carry out air-to-ground and air-to-air missions in all types of weather conditions, day or night.

Capable of doubling the speed of sound at full power, the F-15E can carry more than 10 tons of payload, including Joint Direct Attack Ammunition (JDAM), AGM-130 Standoff Weapon Systems, Range Air-to-Air Missiles AIM-120 Advanced Medium (AMRAAM), AIM-9X Sidewinder and a wide variety of pumps. The Strike Eagle has been widely deployed by the USAF in Operations Desert Shield and Desert Storm, as well as Operations Southern Watch and Northern Watch. Other combat deployments include Operation Deny Flight, Operation Enduring Freedom, Operation Iraqi Freedom, and Operation Dawn of the Odyssey.

The Su-30MKI (Flanker-H) is a long-range, two-seater multi-role fighter in active service with the Indian Air Force (IAF). Designed by Russia’s Sukhoi, it is currently manufactured under license by the Indian company Hindustan Aeronautics Limited (HAL). The first Russian-made Su-30MKI variant entered service with the IAF in 2002, while the first Indian-built aircraft was added to its military in 2004. The fighter has internationally developed components, avionics and subsystems supplied. by 14 manufacturers from six nations.

The Su-30MKI can carry a number of air-to-surface and air-to-air missiles, as well as BrahMos supersonic cruise missiles, a GSh-30-1 30mm cannon, and a wide variety of bombs.

The Saab JAS 39 Gripen belongs to a new generation of multi-purpose light fighters capable of carrying out a wide range of air-to-air, air-to-ground and reconnaissance missions. The aircraft is designed in a combination of “Delta-canard” flight to offer high maneuverability in close combat or dogfight, first entering service with the Swedish Air Force in 1997 and currently used by the air forces of the Czech Republic. , Hungary, Switzerland, Sweden, South Africa and Thailand.

Gripen NG, the new version based on the Gripen C / D, can be armed with METEOR, AMRAAM, IRIS-T and AIM-9 missiles. This new generation of aircraft incorporates a multi-frequency data link, fully integrated avionics mission system, PS05 long-range multi-mode radar and sensor fusion. Among the most prominent missions carried out by the Gripens, it is worth highlighting the combat operations in Libya to support Operation Unified Protector in 2011.

The F-16 Fighting Falcon is a combat-proven single-engine multi-role fighter initially designed by General Dynamics engineers to carry out air superiority missions for the US Air Force (USAF). Despite the passage of time, the F-16 has become a first-rate multipurpose aircraft throughout its period in active service thanks to the continuous evolution of its technologies.

The F-16 program has achieved great success in the international market, being acquired by 26 countries with more than 4,500 fighters manufactured to date, with a further 54 on order for 15 customers. The aircraft first made an appearance in combat during Operation Desert Storm in 1991. Since then, F-16s have been used extensively in various combat missions in Iraq, Afghanistan and Libya.

The latest versions of the F-16, Block 50/52 and Block 60, incorporate modern technologies and improvements based on the extensive combat experience gained. As a result, the new versions of the fighter are delivered with advanced avionics, state-of-the-art cockpit and instrumentation, as well as new sensors and weapons packages.