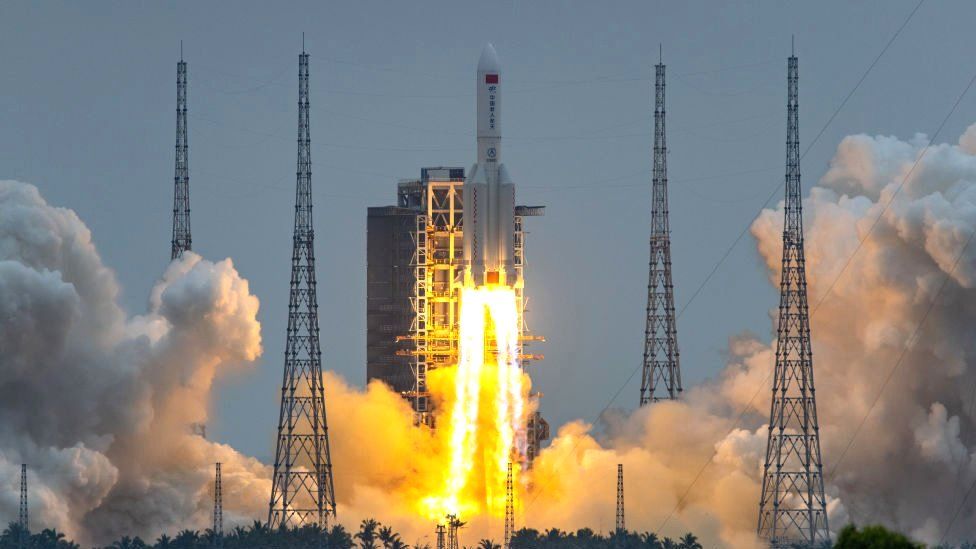 The Washington / Beijing
US government has warned that a massive Chinese rocket may hit the Earth on Saturday. It is feared that this rocket weighing around 21 tonnes may target densely populated metros such as New York of America, Madrid in Spain and China’s Beijing city. However, scientists have not been able to find out exactly where this rocket will fall.

The US Defense Ministry Spokesperson revealed that it may re-enter the Earth’s atmosphere on Saturday. He said that information will be given about this rocket by posting it continuously. Satellite trackers reported a 100-foot-long and 16-foot-wide rocket moving toward Earth at a speed of 4 miles per second. This rocket is named 2021-035B.

“Rocket may hit Earth on May 8”
US Defense Ministry Spokesperson Mike Howard said, “The US Space Command has full information about and is monitoring China’s launch March 5B.” However, where this rocket will fall right now, the exact information can not be given before it enters the Earth’s atmosphere. This rocket may hit the Earth on 8 May. ‘

Let us tell that a 21-tonne giant rocket of China has gone uncontrolled in space and it is now moving towards the Earth. Experts have warned that if a Chinese rocket hits a populated area on Earth, massive catastrophe may occur. It is feared that the debris of this rocket may fall anywhere in cities like New York, Madrid and Beijing. China launched its launch March 5B rocket on Thursday . ‘Chinese rocket can hit anywhere’.

Astronomer Jonathan McDowell, who monitors the Earth’s object, told Space News that the satellite is currently being diverted from New York, Madrid, Beijing to the north and south to Chile and New Zealand. He said that this Chinese rocket could hit anywhere in the region. It can fall in the sea or in a populated area.

However, he also said that a large part of this Chinese rocket will be burnt to ashes when it comes close to the earth. The satellite tracker has detected that a 100-foot-long Chinese rocket is moving towards Earth at a speed of 4 miles per second. On Thursday, China sent the first part of its space station to be built with the help of this rocket. This module is named Tianhe.

Main body of the rocket is 100 feet tall
, according to experts, this object weighing 21 tons is the main stage of the Chinese launch March 5B rocket. He said that after its launch on Thursday, this rocket started hitting the earth instead of falling at a predetermined location in the sea. It is being told that it will fall on the earth in the next few days. This main part of the rocket is 100 feet long and 16 feet wide. Experts say that this huge part of the Chinese rocket will burn in the earth’s atmosphere but its debris can fall anywhere on the earth.

This is not the first time that China’s rocket has been uncontrolled in space. Earlier in May 2020, the main part of the Launch March 5B rocket became uncontrolled and its debris fell over the Atlantic Ocean. NASA described the Chinese rocket accident as truly dangerous. The rocket passed over the Los Angeles and New York cities of the United States before it fell.

Also read Pakistan Is The Most Dangerous Country: US Defense Minister

Pakistan Is The Most Dangerous Country: US Defense Minister

The Thief Faked Her Death, Caught By Police Via A Black Poodle