by Arpita Mackelvy
in Sports
Reading Time: 4 mins read
A A 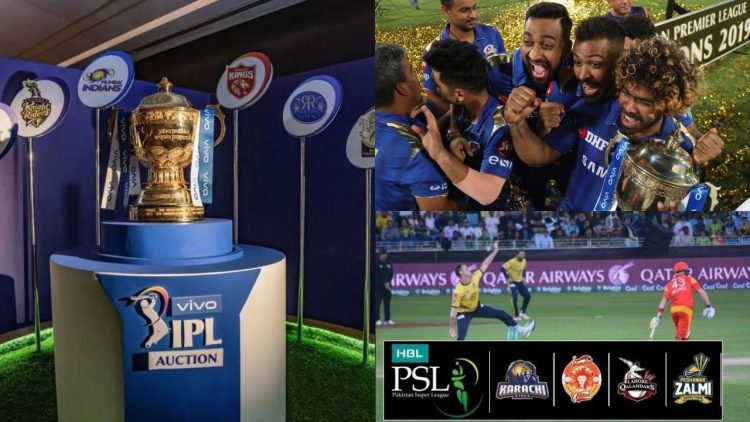 Cricket is a game that attracts people of all ages and from every corner of the world. It is now getting more advanced and popular, resulting in more viewership. This brings an opportunity for more advertisement and with advertisement comes the money. The Cricket leagues spread all over the world. But it is tricky to figure out the best one. So here we have ranked the top Cricket leagues in the world.

The Indian Premier League was first founded in 2008 by the BBCL- Board of Control for Cricket in India. It draws so much attention because it brings amazing players from different countries rather than just nation-v-nation. The event takes place every year in India between March and May in India and has become one of the most highly attended events. There is no doubt that IPL changed the entire cricket, it has become more commercialized, and entertaining. In fact this year the Brand value of IPL is estimated at about $4.16 billion. The game of cricket has taken the world by storm, so with the rise of cricket it also gives opportunity even to the audience to earn money by betting on sports events like cricket matches. Nowadays, most of the betting is happening on mobile and It is as easy as cricket betting app download and start earning.  Many bookmakers provide mobile apps, apart from an excellent mobile site. With a user-friendly mobile app, customers can conveniently wager on their favorite cricket events as well as teams across the globe.

The Big Bash League (BBL) is the second most-watched cricket league globally. That was established in 2011 by Cricket Australia. BBL was the first league to introduce the light-up stumps. And the other thing that makes it interesting is its bat flip technique instead of the traditional coin flip. This decides which team will be first bowling or batting. The Australian professional Twenty20 league’s format is similar to IPL. And also it is a rival to the IPL. It is played in the Australian summer, which is December – February. The league has eight city-based teams that have both regional and international players. In 2020 the league also came up with exciting rules, such as Power Surge, Bash Boost, and X-Factor Player.

This league T20 Blast was started in England. Where blast 1st edition took place in 2003. It is one of the most popular and entertaining leagues. But less than Vivo IPL and KFC BBL. But the worth appreciating thing is that T20 Blast League has done a great job in producing and grooming young talent. 19 editions of blast took place so far. And overall it has 18 teams that are playing in the T20 Blast league. The blast prize money is USD 236,127 for the winning team.

The Caribbean Premier League is held in the Caribbean. It is an annual Twenty 20 cricket tournament held in the Caribbean. Created in 2013 this is the only cricketing tournament that gets a good response from both the crowd and the players. So far 9 editions took place since 2013. The Caribbean Premier League has 6 teams in total. And ranks 4th in popularity and entertainment. Even the Hollywood star Mark Wahlberg has been seen in this league supporting West Indian cricket. Also, let us tell you that the winning amount for the team is USD 429,799.

The Pakistan Super League was founded in September 2015 by the Pakistan Cricket Board, and six different teams play this T-20 match. It represents six different cities in Pakistan. Because of its glitz, it is also among one of the top 10 premier leagues in the world. When on Feb 8, 2016 tournament’s first edition started it has only 5 teams. The first season of the league operated entirely in the United Arab Emirates because of the security situation in Pakistan. The event takes place every year in February/March. Although the league follows the International Cricket Council (ICC) rules, still it introduced a DRS system.

Also, read Who Is Norm Self? A Man Who Turned P*rn Star At The Age Of 83

Inside Pics Of Karan Johar’s Birthday Party Revealed: Check Them Out

Inside Pics Of Karan Johar's Birthday Party Revealed: Check Them Out