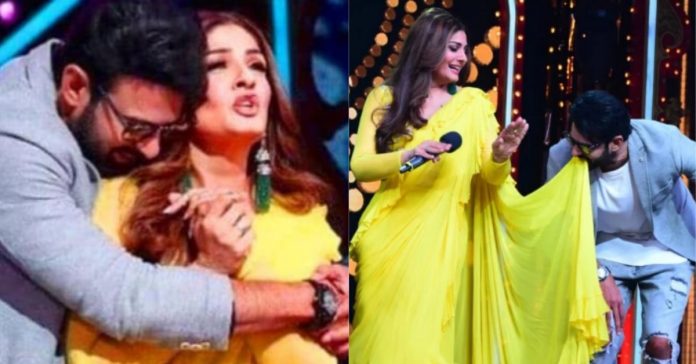 South’s superstar Prabhas’ upcoming thriller film Saaho is releasing on August 30, 2019. These days he is busy in the promotions of his film. Recently, he reached to the sets of Nach Baliye 9 with his co-star Shraddha Kapoor. Meanwhile, Prabhas enjoyed the performance given by the contestants. He also made a revelation that shocked the audience, contestants and even more shocked Raveena Tandon.

One of the judges of the show, Ahmed told that Prabhas has a dream, he is a fan of a girl who is currently present in the show. Listening to this, everyone started looking at Prabhas. Then Prabhas looked at Raveena and said, ‘Ma’am, I am a big fan of yours. You are my ex-girlfriend.’ Raveena was shocked as soon as she heard Prabhas, then said (by laughing), ‘if Anil (Raveena’s husband) listens to it, he will kill you’. Prabhas laughed and said, ‘I will manage that. I am your big fan. Want to dance with you.’ Then both the stars danced on Raveena’s hit number Tip-Tip Barsa Pani.

Saaho will be released in three languages Hindi, Tamil and Telugu. Many big stars are working on it. Saaho is said to be one of the most expensive films ever made in India. Prabhas has done only 3 films in the last 6 years. Prabhas has also learned Hindi for this film.

PM Modi Answers to The Most Asked Question ‘How Bear Grylls Understood Hindi on ‘Man vs Wild’ Show?’