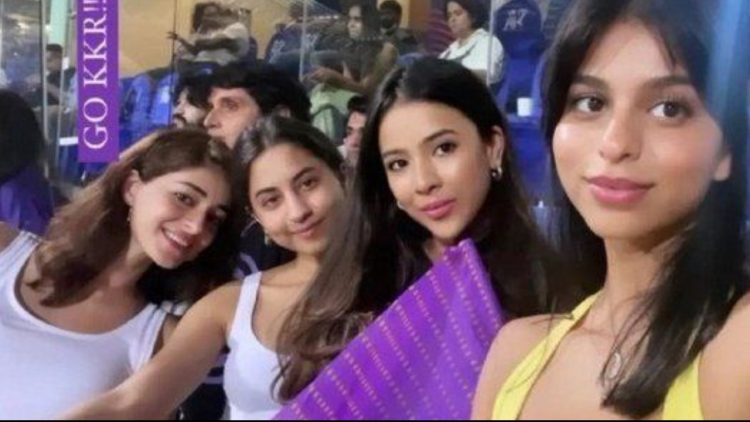 In the match against Punjab, Kolkata won by six wickets. With this, Kolkata has got four points in three matches and this team has reached the first position in the points table. Batting first, Punjab had scored 137 runs. In reply, Kolkata won by scoring 141 runs. Shahrukh Khan’s daughter Suhana Khan along with her friend Ananya Pandey and brother Aryan Khan had come to watch this match. All three added glamor during the match. At the same time, after the end of the match, Andre Russell was seen posing with his orange cap and Umesh Yadav with his purple cap.

Aryan Khan, son of Shahrukh Khan, owner of Kolkata Knight Riders, also came to watch this match. Suhana Khan and Ananya Pandey were also with him. Together these three added glamor during the match. The arrival of these two in the field was also successful and their team won the match by six wickets.

Ananya Pandey and Suhana Khan grabbed everyone’s attention during the match. Both had come to support Kolkata. Ananya has made her mark in Bollywood as an actress, while Suhana is making her Bollywood debut through Direction.

After the match, Andre Russell was seen posing with his orange cap and Umesh Yadav with his purple cap. Russell has scored 95 runs in three matches and is the highest run-scorer this season. He played a fine innings of 70 runs against Punjab. At the same time, Umesh Yadav, who took four wickets in this match, is the highest wicket-taker this season. He has eight wickets in three matches.

Kolkata fast bowler Tim Southee took a brilliant catch in this match. He caught the catch by running about 33 meters away from the boundary and caught Shahrukh Khan of Punjab. Shahrukh could not even open his account in this match.

The 10 Most Iconic Oscar Dresses Of This Century

The 10 Most Iconic Oscar Dresses Of This Century