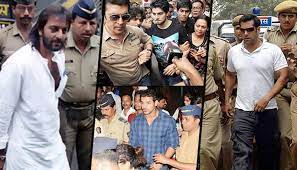 Shahrukh Khan is one of the artists who often avoid controversies. But who knew that Shahrukh Khan’s son Aryan would have to go to jail. Recently, NCB arrested 17 people, including Aryan, from the rave party going on a cruise going from Mumbai to Goa. Court has sentenced Aryan Khan to 14 days in jail. This case has given a big blow not only to Shahrukh Khan but to the entire Bollywood. All the Bollywood stars are reaching Shahrukh’s house one after the other. But even after all the efforts, Shahrukh is not able to bring his son out of NCB’s grip. Let us know today about some such Bollywood star kids who have eaten the air of jail.

Shahrukh’s son Aryan Khan was arrested by the NCB on October 2 from a rave party going on a cruise from Mumbai to Goa. Aryan had admitted in the custody of NCB that he has been taking drugs for 4 years. The court has sent Aryan to 14 days jail for the time being.

Actress Jiah Khan committed suicide by hanging herself in the year 2013. He also left a suicide note with him. In which Jia had made serious allegations like physically abusing Sooraj, forcing her to have an abortion. The police arrested Sooraj Pancholi for abetment to suicide. After which he had to go to jail. The Bombay High Court, however, gave relief to Sooraj, saying that he was not solely responsible for Jiah’s suicide. The matter is still going on in the court.

Sanjay Dutt was arrested from the airport in 1993. With the police getting AK-56 from his house, there was an allegation of knowing about the blast in Mumbai in advance. So TADA and Arms Act were arrested on him. In this case, in 2013, the Supreme Court sentenced Sanjay Dutt to five years in jail, which was later reduced to three years. Since 2013, Sanjay Dutt has been in Yerwada Jail in Pune and in 2016 he was released after completing his sentence.

In the year 2002, Salman Khan’s car climbed on the footpath of Bandra. During this, a laborer died in his car and four people were injured. It is said that Salman was driving under the influence of alcohol. After which he had to stay in jail for several days, but later he got bail. In 2015, he was sentenced to five years in jail by the lower court. But the Bombay High Court acquitted him of all charges. Salman said that he was not driving the car, but his driver was driving the car. Many memes were made on this matter.

Anushka Sharma: “Only I know The Real Side Of Virat Kohli”