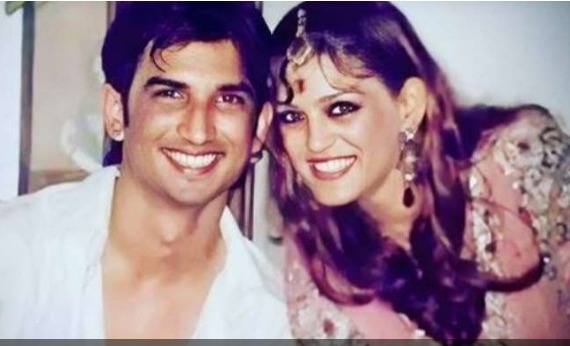 After the death of actor Sushant Singh Rajput on 14th June 2020. The Enforcement Directorate (ED), Central Bureau of Investigation (CBI), and Narcotics Control Bureau (NCB) are all investigating the case, especially after the emergence of financial irregularities and drug angles. After the late actor’s girlfriend, Rhea, and her brother Showik were arrested, many names from Bollywood have emerged out, and are now coming under the radar of NCB. While the investigation is still underway. Amidst this, the late actor’s sister Shweta Singh Kirti shared some unforgettable memories with her brother Sushant Singh Rajput.

On Friday she shared two throwback pictures with SSR from her wedding, calling them her “treasured memories”.  In the first picture, Shweta can be seen dancing at the wedding ceremony in an onion colored lehenga choli, with Sushant, while in another one both can be seen in a candid photo. After the picture was posted it got loads of reactions and comments.

Check out the pictures here.

Let us tell you that amid these ongoing controversies Shweta has also decided to take a break from social media or 10 days. Announcing about her decision she took it to her Instagram post and wrote “How much ever you try to stay strong, but at times this strong pain takes over that Bhai is actually not there anymore. Will never be able to touch him or see him laugh or listen to him cracking jokes… I wonder how long will it take to heal completely. Have decided to take 10 days off from being online and immerse myself in deep meditation and prayers. Really need to heal from this pain.”

On the other hand, as the investigations are still going on. Actor Shekhar Suman who has been vocal, right after the actor’s demise took to twitter account and wrote  ‘Let the drugies die, put them behind bars, take them out of the country, remove them from the film, we don’t care about anything. Just tell us who killed Sushant and why? Where did Pithani, Neeraj, Samuel, Khatri, Cook, ambulance, masked girl, locksmith, and the whole gang vanish? ‘