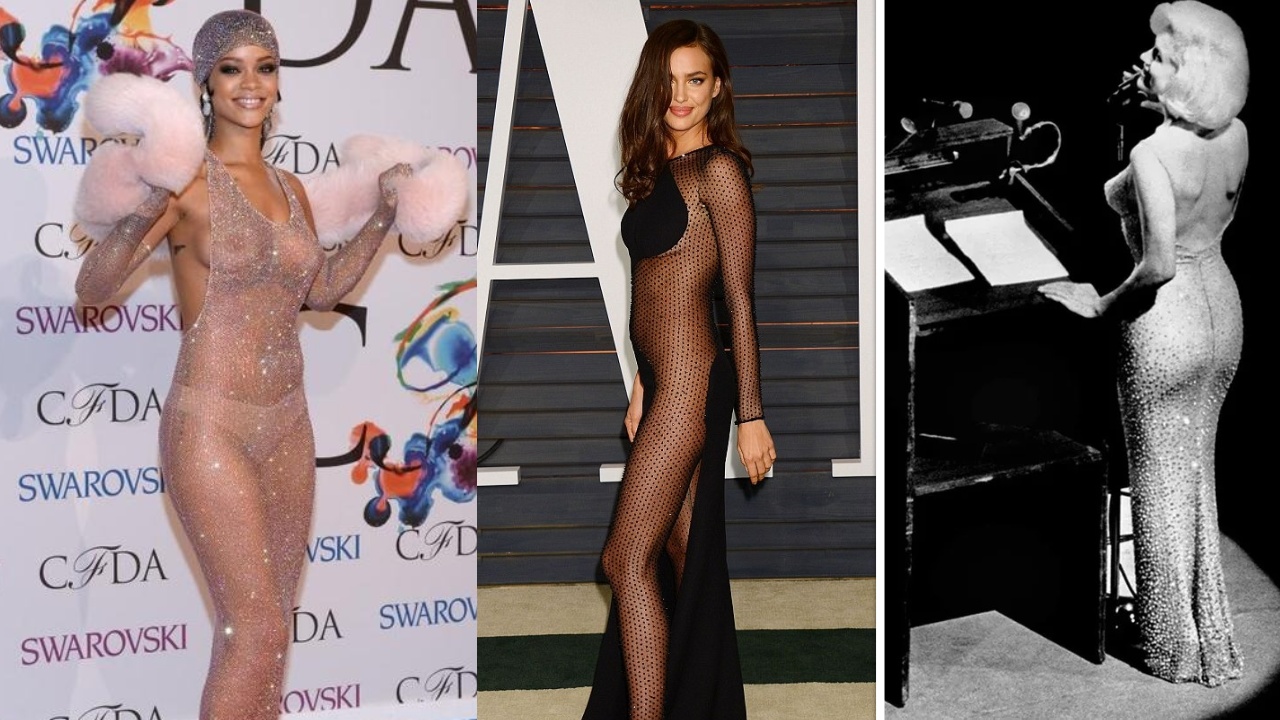 In recent years, stars like Beyoncé to Rihanna increasingly appeared on the red carpet in completely transparent outfits. But it started long back and that’s why we decided to recall the history of this trend: where did the fashion for nudity come from, how the evolution of “naked” dress went and why the modern fashion industry is raising nudity on the shield.

After Beyoncé, Kim Kardashian, Jennifer Lopez, and Kendall Jenner were simultaneously snapped in naked dresses at the Costume Institute Ball in Los Angeles. It made us think that it is giving a direct marketing signal for the future development of fashion. So from Kate Moss to Rihanna, here are the personalities who appeared in completely transparent outfits.

Check them out below:

Marilyn Monroe in 1962 appeared on the anniversary of John F. Kennedy in the first such dress: the outfit of designer was Jean-Louis Berzault The father of all couture in Hollywood, strewn six thousand diamond sequins, on the body right before the actress came out.

Seven years later, Barbra Streisand, who then thundered in the film “Funny Girl”, decided on a bold experiment. At the Oscars in the year 1969, she wore a skin-tight sheer jumpsuit that thrilled the public when the actress took the stage to collect her Best Actress statuette.

In the late 1980s, singer Cher, the main queen of outrageousness, became the ambassador of “naked” dresses. There were two high profile exits: the first – in 1988 when she appeared at the Oscar in the form of the Shamakhan queen, and the second three years later.

The most talked-about red carpet dress of the 2000s was the Versace outfit, in which Jennifer Lopez came to the Grammy ceremony. His cleavage area ended below the navel.

Lady Gaga made headlines when she appeared in a transparent dress at the 2011 CFDA Awards. Her fashion sense is an acquired taste. You either love it or you hate it. Although her outfit raged controversies but Lady Gaga’s outrageous attire merited her being deemed a “fashion icon.”

It seems like Amber Rose was certainly not shy. And her dress says it all. Showing off her killer curves, at the 2014 VMA Awards she made plenty of jaws to drop by wearing a barely there silver chain dress designed by Laurel Dewitt. She was seen wearing practically nothing.

Rihanna at the 2014 CFDA Awards. She was next to wearing nothing. The singer rocked a sheer dress that exposed a lot of her skin. Well it was not just the skin but it also included her breasts, that were slightly covered by a pink fur stole.

Irina Shayk at the Oscar afterparty, 2015, dared to wear something that took attention. She wore a scandalous gown. And it looks like being naked was the main style of choice.

Also, read Deadly Substances That Were Once Sold In Pharmacies As Medicines