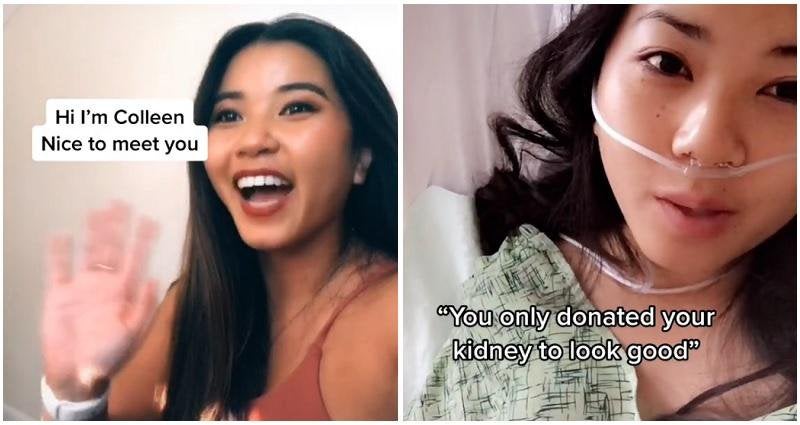 If you were to donate a kidney to your dying boyfriend, would you expect loyalty in return?

Well, Colleen Le didn’t get it. Instead, she was deceived.

Le went viral for finding the humor in her situation and sharing her story on TikTok.

In her TikTok, Colleen Le says she was cheated on after giving up her kidney to her boyfriend.

In the now-viral TikTok video, which has been viewed more than 10 million times, Le comically breaks down as the screen reads, “getting tricked.”

She captioned the video “Everything happens for a reason.”

Needless to say, viewers wanted to know more about her story.

In another video, she discussed the bizarre situation.

When Le met her ex-boyfriend, she was diagnosed with chronic kidney disease at the age of 17 and her kidney function was less than 5%.

She described finding out she was compatible and deciding to have the surgery so she wouldn’t have to watch him suffer.

However, only 7 months after the operation, he cheated on her at a bachelorette party in Vegas.

She said he was a “straightforward Christian,” so she figured she didn’t have to worry about him going out. But she was wrong.

In the video, she recreates that night and recounts how her ex apparently knocked on her door and admitted to cheating, then begged her to take him back.

Le said, “lots of arguing later,” she decided to give him a second chance.

But, just 3 months later, he blocked her on social media, stopped responding to her texts and broke up with her after she said, “If we’re meant for each other, God will eventually get together”.

The video drew a lot of attention on TikTok

Although Le made it clear that it’s been over five years since she found out and has moved on, several people still tell her to get the kidney back.

One user jokingly commented, “time to get it back, gorgeous”

Similarly, another said “I know a guy who can get it back”

But, Le says she will always be grateful that she was able to give someone a second chance at life, despite the circumstances.

However, it’s still fun to joke about it now, she said.

Le has since made several videos about the traumatic event and changed her TikTok bio to “Just a girl living a normal life with 1 kidney.”

In a video, it is written: “introduce yourself and the sentence that broke you”. The video then cuts to her in a hospital bed with the screen reading, “You only donated your kidney to look good. »

Well, the ex has to live with the fact that he couldn’t survive without her. His loss.

She has since reached over 10,000 followers on TikTok.

The Boys Season 3: How did Soldier Boy end up with the Russians? Here’s everything you need to know