Home » News » Ukrainian Boeing 737 crashes in Iran, kills all the 176 people On board

Ukrainian Boeing 737 crashes in Iran, kills all the 176 people On board

by Shavvy
in News, Trending, World
Reading Time: 2 mins read
A A 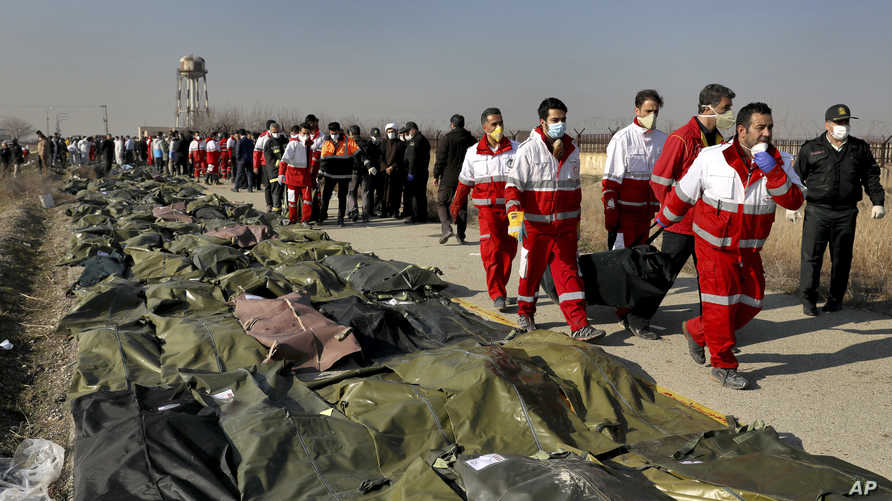 Rescue workers carry the body of a victim of a Ukrainian plane crash in Shahedshahr, southwest of the capital Tehran, Iran, Wednesday, Jan. 8, 2020. A Ukrainian passenger jet carrying 176 people crashed on Wednesday, just minutes after taking off from the Iranian capital's main airport, turning farmland on the outskirts of Tehran into fields of flaming debris and killing all on board. (AP Photo/Ebrahim Noroozi)

A Ukrainian airplane got crashed after taking off from Tehran airport on Wednesday, ends up with killing all the 176 passengers on board which were mainly from Iran and Canada.

According to agencies the Boeing 737 flight took off from Tehran to Ukrainian capital, Kiev. But after a short flight Ukraine passenger plane exploded. Explosion happened after getting crashed into the field in southwestern outskirts of Tehran, Iran.

The majority of passengers were non-Ukrainians, including 82 Iranians and 63 Canadians. According to Iranian authorities some ‘Technical’ issue caused the plane impact with ground. Rescue workers claimed carrying body bags and personal items of the passengers like clothes, luggage, a Santa Claus doll and a boxing glove which all was scattered into the debris.

Iran Refused to give the black box

Later Iran Civil Aviation Organisation head Ali Abedzadeh said, “We will not give the Black box to Americans and Boeing manufacturers”. In another statement he said, “This accident will be investigated by Iran’s aviation organisation but the Ukrainians can also be present during the incident’s investigation.”

According to the press, crash happened after hours. When Iran launched a ballistic missile attack to two Iranian housings containing US forces, in vengeance for the killing of Iran’s Islamic Revolutionary Guard Corps.

According to website FlightRadar24 the plane stopped sending data almost immediately after it took off on Wednesday morning from Tehran.