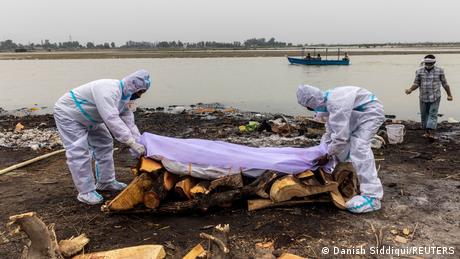 In states like Bihar, Uttar Pradesh and Madhya Pradesh, how suddenly corpses floating in such a large number of rivers came out remains a mystery so far. Several days after the founding of several corpses flowing in the Ganges river in Buxar, Bihar, the administration has not yet confirmed whether the corpses were infected with Covid-19. On Tuesday 11 May, after recovering dozens of dead bodies found in a village in Buxar, the district administration had set up a huge net in the river there.

In the local media reports of Bihar, it has been claimed that at least five more bodies were found in this trap on Wednesday. The total number of dead bodies found in this way has gone up to 81 and the administration says that everyone has been cremated after taking a test sample and DNA sample.

A quarrel between the officials of Bihar and Uttar Pradesh is happening on whether the dead bodies belonged to the people of Bihar or Uttar Pradesh or elsewhere. Bihar’s Water Resources Minister Sanjay Jha has said that after the post-mortem of the bodies, it was found that they are at least 3-4 days old, which means that they have been swept away. He has also said that there is no practice of shedding dead bodies in water in Bihar.

The question still remains that if there is no practice of shedding the dead bodies then how come the dead bodies reach the river. There is speculation that possibly poor families may have dumped the bodies in the river due to their inability to bear the cost of cremation, but such incidents are yet to be confirmed.

Meanwhile, there is a concern among the local people that the river water has not become infected due to the dead bodies and if this had happened, what would be the impact on the people living in the surrounding areas of the river. Meanwhile, in Unnao, Uttar Pradesh, there have been reports of dead bodies buried in sand on the banks of the Ganges river.

Media reports claimed that the authorities confirmed the bodies, but it was not clear whether the bodies belonged to people infected with Covid-19 and how they were eventually found here. On the other hand, in Malda district of West Bengal, the administration has become aware of the corpse found in the river.

The Ganges reaches West Bengal via Uttar Pradesh and Bihar. Officials of the Malda administration are worried that some bodies may not be able to reach there if they are flowing further. Administration personnel are constantly patrolling boats and fishermen have also been warned.

Ben Affleck, Jennifer Lopez, And The Pink Diamond: Here’s What You Need To Know